We know this because the Italian media have been ramming it down our throats for the past two months ever since the Italian took over at Goodison Park.

Numerous players have been linked with a move, yet none have been written about more than Allan, currently pushed to one side in Naples and likely to leave the south of Italy in the summer.

The defensive midfielder was apparently the subject of bids and personal phone calls, and Gazzetta dello Sport published an article in their Tuesday edition reiterating that Ancelotti picked up his mobile back in January and rang Aurelio de Laurentiis, his former boss, directly.

The primary reason was to ‘test the waters’ for Allan, whom the Everton manager still appreciates a lot, and while no deal was done, the parties left with a ‘let’s talk again in the future’ mentality, which means a new phone call from the Toffees could happen.

However, he won’t be the only one they talk about, as Ancelotti is also interested in Kalidou Koulibaly.

It’s explained by Gazzetta the player and manager have an utmost respect for each other, and with Everton trying to ‘regain prestige’, signing a defender like the Senegalese would certainly mean business. 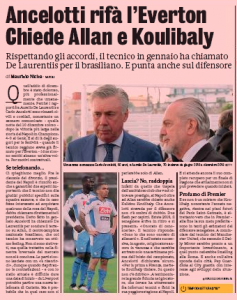 As we all know, there are other clubs interested, with Paris Saint-Germain, Manchester United (they quote the Daily Mirror here for some reason) and Manchester City all circling and likely to provide competition for the Toffees.

It won’t be easy, and these stories aren’t going anywhere anytime soon, especially with no actual football to talk about.

So brace yourselves, Everton fans, because you haven’t heard the last of this.