Home Europe ‘An economic issue’ – Belief it’s ‘impossible’ to get Klopp away from...
SHARE

Barcelona have looked at the possibility of replacing Ronaldo Koeman with Liverpool coach Jürgen Klopp, reports Sport on Tuesday.

Ronald Koeman’s continuity at the Camp Nou is not certain after his side’s hopes of winning the title ended over the weekend, after suffering a 2-1 defeat against Celta Vigo.

Barca’s board, led by president Joan Laporta, are looking at various candidates, so they’re prepared if they decide to cut ties with Koeman.

It’s claimed this option [replacing Koeman] is already on the table and Laporta has been presented with several candidates.

Among them is the Reds coach and the German was appreciated by many within the Catalan club’s new board.

However, Sport are of the belief taking the ex-Borussia Dortmund manager away from Liverpool this summer is ‘impossible’ for the La Liga side due to ‘an economic issue’.

This would rule out Barca’s chances of replacing the former Everton manager with Klopp. 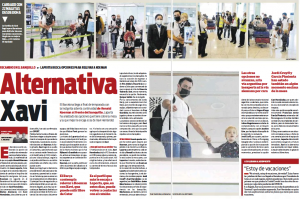 His contract at Anfield runs until 2024 and Klopp’s agent Marc Kosicke has already stressed his client has no plans to leave Liverpool.

If Barca decide to show Koeman the exit door, Sport explain Xavi remains the main candidate to replace him at the Camp Nou.