Guardiola has found himself under increased criticism again this summer after Manchester City’s failure to make the Champions League final.

This year saw them falling to Lyon at the quarter-final stage, with the French side pulling off a surprise 3-1 win in Lisbon.

That defeat meant Guardiola once again missed out on European success with City, who have been knocked out of the Champions League at the quarter-final stage three times and the last 16 once under his leadership.

Each of those defeats has seen the City boss come under fire for changing his tactics, with many believing the Spanish boss overthinks the situation and tries to be too tactical.

That was certainly the case against Lyon, with that game seeing Manchester City change their formation to try and nullify the French side, rather than sticking with their successful 4-3-3 formation.

And that is something Matthäus was not impressed by, saying there was a similar problem when he was in charge of Bayern Munich. 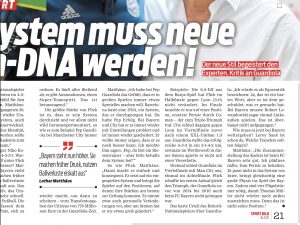 “With Pep Guardiola I have the feeling that he always wants to do something special in big games,” he told SportBild.

“Barcelona had a DNA, a system he pulled through. Pep was successful there. With Bayern and City, he tried it over and over again with changes and failed again and again.

“He always wanted to show that he could do even better. I would like to tell him: Pep, you are a giant trainer – but please keep your system!

“I would describe it as egocentric: Yes, that’s a harsh word, but it is due to what he did: At Bayern, Robert Lewandowski even had to play left wing once. That did not work out at all.”