Newspaper O Jogo says the Magpies ‘admit’ they should soon open negotiations with the Eagles so they can bring the player to the Premier League.

The outlet says Benfica could even sell the 26-year-old, but would demand at least €15m to let him go in this transfer window.

Vlachodimos made 45 appearances for the Lisbon side last season and remains their first option for the next one. So it’s unlikely they’ll make things easy for Newcastle to take him. 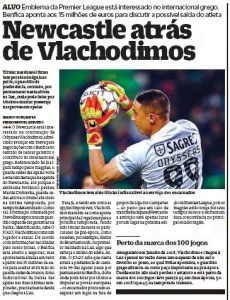 O Jogo says it’s also the player’s wish to stay at Benfica. It’s claimed that he can play European competitions for the Eagles, while for Newcastle, the only thing he could fight for is their stay in the Premier League. The newspaper writes that the Magpies are ‘far from their golden times’.

Vlachodimos had already been linked to Newcastle this year, and at the time, it was claimed that the failure of the Saudi takeover had finished their plans to sign the goalkeeper.