A couple of days ago, Le10 Sport in France claimed that Lyon, preparing for an eventual Tanguy Ndombélé sale, were looking at Edimilson Fernandes.

The Ligue 1 side weren’t at the point of making a move for the West Ham midfielder, but he was on their list of potential replacements for the France international.

One of the big hurdles standing in their way was Fernandes’ current loan to Fiorentina, where the Italian press are still flip-flopping about his future.

While they’ve never said the Swiss player would be staying, they have hinted he was liked at the club and the €9m could be paid. 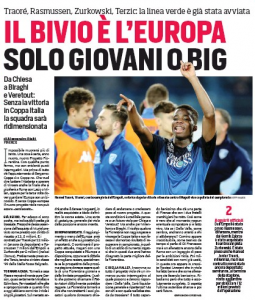 The Florence edition of Corriere dello Sport on Friday, however, says otherwise, stating it’s ‘almost certain’ Fernandes will return to West Ham in the summer, as Fiorentina look to spend the money elsewhere, already committing €37m.

This means Manuel Pellegrini could have a decision on his hands going into the transfer window: does he put faith in the 22-year-old, or does he decide to sell/loan him again.