Alfonso Pedraza enjoyed the second half of last season on loan at Leeds United, but didn’t enjoy it enough to stick around at Elland Road. Leeds were committed to signing the Villarreal owned player on a deal worth around €10m, but only if they secured promotion to the Premier League.

In June, Pedraza was quizzed by the Spanish media about his Leeds United stay and sound very mixed: “After Christmas came the option of going to Leeds. To play in the Championship was a good choice to keep growing. We decided to go and although it wasn’t one of my best experiences, I learned a lot and I improved both as a player and person.

“In all, (at Lugo) I got enough goals and gave a lot of assists. I had a lot of confidence and then, at Leeds, everything went very quickly. I arrived in February, didn’t have time to adapt, the league was already in play and there were many matches. It took more, but it was an experience that helped me to grow.”

When asked if he’d like to play outside of Spain again next season, Pedraza said: “What I want is to play. This year I would like to stay in Spain and gain experience.”

Pedraza ended up signing for Alaves on loan for the season. The move made some sense, but it’s a surprise the 21 year old is no longer playing on the left wing, rather as a left back instead.

Very much an attacker at Leeds United, it’s questionable whether Pedraza would have accepted being pushed back at Elland Road. Perhaps a motivation play as a fullback for Alaves comes with who was there last season. 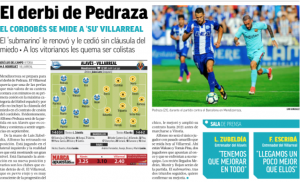 Theo Hernandez excelled for Alaves during the last campaign at left back, whilst on loan from Atletico, and did well enough to convince Real Madrid to sign him.

Marca explain the former Leeds United loanee has been something of a revelation in the position, and is attracting attention. It’s only been a few matches, but Pedraza has shown he excels at the role, and will hope to impress as much as Theo.

On Sunday Pedraza takes on Villarreal, playing the club who own him for the club who loan him, and he’ll be starting at left back.