Arsenal and Sporting have reportedly reached an agreement in principle for the transfer of Lucas Perez to the Portuguese club.

The story is reported by A Bola and O Jogo, two of the biggets sports newspapers in Portugal, who have very similar takes on the case today.

They both claim that although the Gunners and Lions are close to shaking hands, Perez still needs to be convinced to join the Lisbon side.

The player, who has other offers, would be a little reluctant to make the move. O Jogo points out that the attacks on player’s at Sporting’s training ground would be one of the problems. 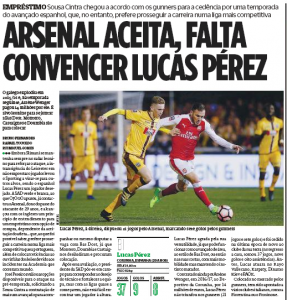 Meanwhile, A Bola says that he’s thinking about other offers he has from Italy and Saudi Arabia.

A Bola claims that Arsenal were initially demanding €5m for the player, but have accepted Sporting’s requests to put the price down. O Jogo says he would arrive on a loan deal, so this is a part that isn’t very clear.

And as the Lions have no condition to pay his full wages, Perez would either have to accept a pay cut or Arsenal would have to commit for part of it in case of a loan.

Although the Portuguese press sounds positive about it, this is a situation that seems a bit unlikely, both for Perez as for Arsenal. Let’s see how things develop in the next few days.