Milan Skriniar started in all 38 Serie A games for Inter Milan last season and his form saw him draw attention of top clubs across Europe.

Earlier in June, we carried a report from Gazzetta dello Sport, who claimed Manchester United, Manchester City and Barcelona have all tried to sign the centre-back this summer. The same month, another report from the same publication claimed the Red Devils’ €65m was turned down by the Nerazzurri.

It was then claimed only a ‘mega offer’ would convince the Serie A club to sanction the sale of the Slovekian international. The 23-year-old gave a lengthy interview to Gazzetta dello Sport and one of the questions he was asked about the interest from Jose Mourinho’s side.

Skriniar expressed his delight that the Red Devils are interest in his service, but admitted that he never thought of leaving his current employer.

Regarding United, he said: “It’s not bad reading or being told that your way of playing is like by big teams. But I never thought of leaving. I’ve always said: let’s see what Inter decides, for me it’s okay.” 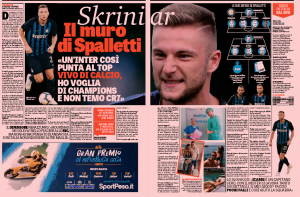 Inter are planning to hand a new deal to their player, but defender says no deal has been agreed yet.

“It’s not done yet, my agent is talking with the club and we’ll see what happens,” he said.