In the past two days, we carried more than one report talking about West Ham United’s interest in Barcelona defender Marlon Santos.

Catalan newspaper Mundo Deportivo said the defender was close to joining the Premier League outfit on June 11th. On Tuesday, the same publication reported the two clubs are nowhere close to agreeing a transfer fee and the situation was “hurting the player”.

Today’s edition of another Catalan newspaper, Sport, says Marlon could be the next player to leave Camp Nou this summer, after Gerard Deulofeu. The latter signed for Watford in a permanent deal for €13m.

Marlon was allowed to join Nice on a two-year loan deal in 2017. After spending one season with the Ligue 1 side, the Spanish champions have decided to recall their player so that they can cash in from his sale.

Barcelona are still negotiating with West Ham for Marlon. Manuel Pellegrini’s side initially agreed to pay €15m for the Brazilian defender, and Sport believe the Hammers now want to reduce the initial fee and include bonuses. 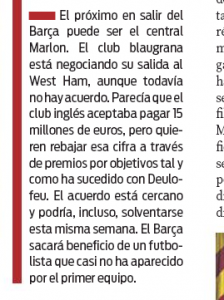 The report claims the “agreement is close” between the two clubs and the deal for Marlon could be completed “this week”.

There’s been contradicting reports in the Catalan media over Marlon to West Ham, and it may not be as simple as the Premier League club trying to lower the price.