Manchester City dominated the Portuguese newspapers on Friday with the main focus being on Bruno Fernandes of Sporting.

Saturday’s edition of A Bola claims the midfielder will be moving to Manchester, amid interest from clubs like Liverpool, Tottenham Hotspur, Arsenal, Juventus, Chelsea, Inter Milan and Paris Saint-Germain have expressed their interest in signing him.

The question is whether the 24-year-old will join the Premier League winners or their league rivals, Manchester United.

Regarding the Red Devils, the report explains that Ole Gunnar Solskjaer has ‘demanded’ his employer to sign the Portugal international in the summer.

It’s claimed the 20-time English champions will ‘return’ to chasing the player as they are looking to bring in a midfielder, especially with uncertainty looming around Juan Mata, Ander Herrera and Paul Pogba.

As of now Manchester United and City are the two clubs ‘persistent’ on Fernandes, and his agent Miguel Pinho will sit down to ‘listen to the terms’ the Old Trafford have to offer for his client before making any decision on his future.

Fernandes, on the other hand, will focus on the remainder of the games with Sporting. 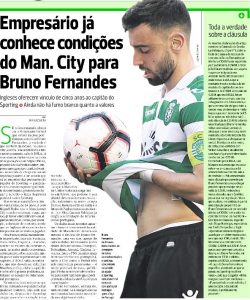 Over the past 18 months, United have been successful in beating City to Alexis Sanchez and Fred’s signing, but so far the two haven’t lived up to expectations.