Portuguese newspaper Record sounds pretty confident that Jesús Corona should be on the way out of Porto this summer.

They say the midfielder’s agent has been contacted by clubs who are interested in signing him, but will only make their moves later in the transfer window.

Wolverhampton Wanderers are named as one of the sides who could go for the 27-year-old in the coming weeks, and there’s a good reason for that.

It’s claimed that many clubs are waiting to see how they’re going to do in the Champions League and the Europa League before making their moves in the transfer market. 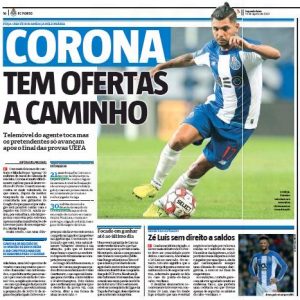 Record points out that Inter Milan, Sevilla and Wolves are three of the sides who’ve been linked to Corona, and all of them are still taking part in European competition.

The Mexican international is protected by a release clause of €30m, and that’s why his move seems so likely. Porto see themselves with their hands tied by such a low price.

Wolves have been linked to the midfielder in the past couple of months, and since there have been no reports about bids from the Molineux side, perhaps they’re indeed waiting for the end of the Europa League.