On April 7th, AS reported that Manchester United have taken an interest in Real Madrid’s James Rodríguez.

Two days later, Calcimercato.it explained the Red Devils are one of the sides interested in the Colombia international.

Sport on Thursday also talk about the 28-year-old and their headline reads ‘James points to United’.

Within the report, it’s explained the player is aware that he is ‘not liked’ by Zinedine Zidane, which is why his representative Jorge Mendes has started searching for a new destination for the South American.

That’s when United get a mention and it’s stated the super-agent has contacted Ole Gunnar Solskjaer’s side to ‘test a possible interest’ of the Old Trafford club in his client.

It’s claimed United tried to sign Rodríguez in 2017 and they had agreed personal terms with his agent. However, the transfer never materialised because the Premier League side failed to find an agreement with Real Madrid.

The La Liga side offered Rodríguez to United in January as part of the deal for Paul Pogba. This option was rejected by Solskjaer’s side because they had no plans of selling the Frenchman. 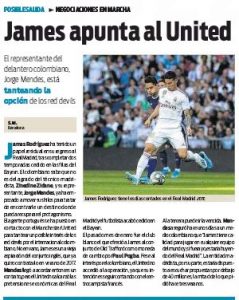 Sport’s report only states Mendes has contacted United to see if they are interested in Rodríguez, trying to build a deal, but they don’t provide any update on the English club’s response.

Real Madrid, on the other hand, are ready to listen to proposals below €40m for Rodríguez, half of what they had asked three years ago.