Home Europe The aftermath: What’s being said in Italy about Milinkovic-Savic to Man United...
SHARE

If you missed out on the news on Tuesday, La Repubblica made a rather strong claim that Sergej Milinkovic-Savic’s transfer to Manchester United was nearly done for €75m + bonuses after Real Madrid had ‘accelerated’ for Paul Pogba.

Talk of a five-year contract being agreed was also included, and they made it seem like a transfer was mere hours away.

AS in Spain, with their information, calmed the situation down a bit, corroborating the news of the Manchester United offer for the Serbian, but playing down the Pogba angle, hinting this was just the Red Devils planning ahead in case the La Liga giants came knocking.

Seeing as the La Repubblica article was first published on their website, we decided to have a look at what their Wednesday print edition had to say, and, to little surprise, a very similar article appears in it.

However, it’s not exactly the same, as the Italian newspaper appear to take a small step back when it comes to the urgency, this time writing that the €75m + bonuses (which they now have down as around €15m) is the ‘basis currently being worked on’, suggesting there’s still work to be done. 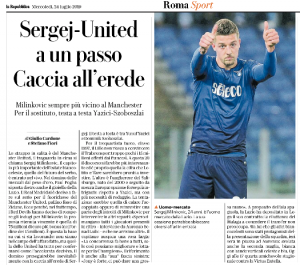 They make that even clearer when explaining the negotiations aren’t at a ‘done deal’ stage yet.

Interestingly enough, Gazzetta dello Sport have absolutely nothing on the affair, but Corriere dello Sport more than make up for that in their Rome edition.

They start off by explaining that everything is being denied from the Serie A club’s end, writing: ‘Lazio isn’t confirming, they deny the existence of negotiations and nothing has changed since two days ago: the line from the club is that no official offers have arrived.’

And Corriere’s version of the events backs all that up, since they report Manchester United are ‘preparing the assault’ for Milinkovic-Savic, with their figures very similar to La Repubblica’s at €75m + €15m in bonuses and a five-year, €6m/year contract. 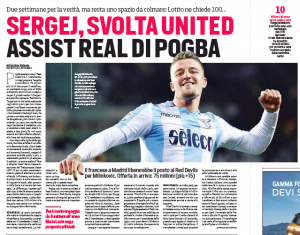 Much like La Repubblica’s second article, and AS before them, they point out we aren’t ‘on the verge of a sale’, but in the early stages of an affair in its ‘embryonic state’ (fancy word use alert).

What needs to happen is for talks to take place, find an agreement, maybe add a few bits of money here and there, and ‘especially guarantee the substitutes’ down Lazio’s end.

Corriere then indulge in some predictions game, believing that Manchester United’s offer, should it be made, will fall short of Claudio Lotito’s demands, and expect him to try and squeeze as much money out of the Premier League club as possible. 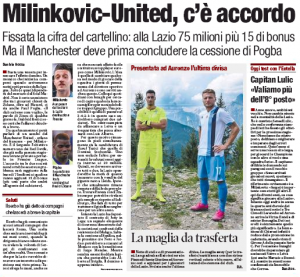 The former are very optimistic, believing that an agreement between the two sides ‘shouldn’t be a problem’ at the fees already mentioned in this article, and even go as far as saying Milinkovic-Savic has ‘already told his teammates he will leave Rome’.

They don’t say he’s specifically told them he’s going to Manchester, but where else would he be going at this stage? 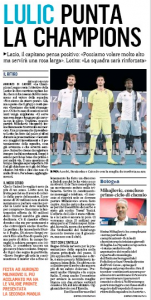 As for Il Messaggero, they don’t seem to be in the loop here, only going by what Lotito said about not needing to sell to buy, which they somehow deciphered as the Premier League club’s ‘phantom €80m’ bid already being rejected.

That’s everything from the print editions of the Italian newspapers on this for today, folks, and, while we already know 65% (guesstimate) on social media won’t even bother making it this far as they’ll just read the headline and quickly try and be the first to reply with “b*****t” or “your a bunch of lairs [sic]”, for those who have reached this point, thank you very much.

We don’t always enjoy doing these sagas because they can get repetitive, and we understand your frustration, but if we don’t do it, you’ll likely get a twisted version of the story somewhere else and not what’s actually said in the foreign media.

And on that note, until next time (which, unfortunately, probably means tomorrow).