Wolverhampton Wanderers are interested in a move for KAA Gent striker Roman Yaremchuk, with the player keen to move on this summer.

That’s according to Het Laatste Nieuws, who say the Belgian side are eyeing up a €20m package to let the Ukrainian forward leave.

Yaremchuk has been in excellent form for Gent this season with 15 goals and five assists in 27 games in the Jupiler Pro League so far.

That has earned him the attention of several clubs, including Wolves, and Yaremchuk is keen to make a move should it be on offer.

He wanted to leave last summer, but Gent blocked anything happening, instead reaching an agreement with the player and his agent that he could go if they found a club willing to pay their asking price.

They had a €15m asking price in mind at the time, but according to HLN’s sources have now upped that to ‘more than €20m’.

The Belgian club are bolstered by the fact they have the striker ties down to a deal until 2025 and so have a ‘strong position’ to work from at the negotiating table.

It is up to Yaremchuk to convince his suitors that he is worth such a price then, something he is aware of, with six games left of the season for him to make his mark and potentially end up as the club’s best goalscorer since 1980. 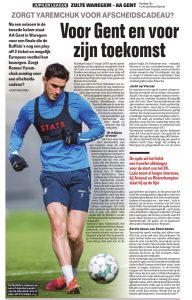 He wants a move before the European Championships this summer, where he will be Andriy Schevchenko’s first choice for Ukraine, and so the end of the season is his chance to prove his worth.

His entourage have made it clear that the striker is ‘on the map’ at various clubs in Europe, with it stated that he is ‘on the list’ at Wolves.

So far, there has been ‘nothing concrete yet’, and that’s why Yaremchuk has ‘every interest in encouraging’ clubs to get things underway, starting with a clash against Waregem on Sunday.