That’s according to Het Nieuwsblad, who provide a short update on Spurs’ attempt to acquire the 18-year-old’s services.

Having made his first team debut last season under Vincent Kompany, the midfielder has featured regularly in the Jupiler Pro League since last November. He has three goals in 21 league matches this term.

The newspaper focuses on the youngster’s rise to the first team and at the end of the report, they mention the north London club tried to bring the teenager to England when he was 15 years old.

Het Nieuwsblad explain El Hadj’s progress at a young age caught Tottenham’s attention. They even tabled a proposal for signing him, but the player ‘declined’.

He felt ‘such an offer came too early’ because there 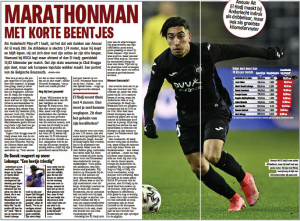 was ‘still room for growth’ at the Belgian club.

El Hadj’s profile has now put top clubs on alert, but the report doesn’t specify whether or not José Mourinho’s side retain an interest in the Belgium U18 international.

His current deal with Anderlecht runs down in 2024.