Barcelona are ‘convinced’ that Leeds United star Raphinha will be joining them this summer, with the deal to take him to the Camp Nou ‘hotting up’.

That’s according to Marca, who are backed up by Mundo Deportivo and Sport in showing confidence a deal can be struck.

They report that Barcelona believe they have an ace up their sleeve in the race for Raphinha because the player wants to join them above all else. They also have an excellent relationship with his agent, Deco, to use to their advantage and it is a case of ‘yes or yes’.

The newspaper says they are willing to pay Leeds €60m for their star man, which they would pay in three instalments, while he would also earn around €6m a year in wages.

Mundo, meanwhile, say they believe a deal can be done at €50m while Sport have them willing to pay €55m.

Manager Xavi is keen on the player as he needs wingers for the system he wants to implement, believing that the Brazilian winger offers something different to what he current has. He considers him an ‘ideal’ addition to his squad. 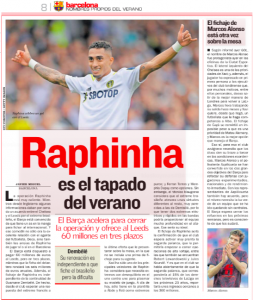 There is fierce competition for his signature, though, with Chelsea having recently joined the race and made it clear they’re willing to pay Leeds’ demands.

Mundo, though, say Barcelona believe they have the ‘advantage’ over the Blues thanks to their relationship with Deco, who once starred at the Camp Nou.

He’s been negotiating with the Catalan giants for days, something they believe shows the player wants the move there above all else. Sport back this up, stating they are ‘clinging’ to the player’s desire and the influence his agent has on proceedings.

However, at the moment, Leeds are not willing to give up the extra €25m they can get from Chelsea, and so it remains to be seen how much Barcelona can convince them to change their mind.

Sport back this up, stating they need to work alongside Raphinha to ‘draw up a joint strategy’ to convince Jesse Marsch and co into the sale on agreeable terms.

They want to get as much as they can after avoiding relegation, which voided a €25m clause and left them free to demand whatever price they want for their star man.