Following on from France Football and El Confidencial both independently saying they’d been made aware Real Madrid are interested in Sadio Mane, Marca did the same with the Liverpool player.

They’ve had articles on the possibility almost every day this week, after Mane was splashed all over their Monday front page.

When a Spanish sport newspaper get the bit between their teeth they don’t let go, as Liverpool fans know all too well, and will therefore also pull the idea into interviews, asking others who have any kind of connection.

They’ve managed to speak with Oriol Romeu this week, and whilst part of the chat was about his time at Southampton, they have a separate article on what they probably really wanted to extract from the midfielder… that Mane would be ready for a move to Real Madrid.

The Southampton player was asked to explain Mane’s qualities, following his period with him at the Saints: “What I would highlight, above all, is his speed. He is a very electric and unbalancing player. He has exceptional physical and technical conditions.

“At Liverpool he’s grown a lot. This season he is exhibiting his best scoring level. I think he has acquired calm and composure when finishing plays, whether to score or assist. That is key.” 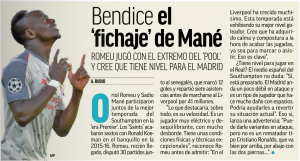 Marca say Romeu ‘did not hesitate’ when asked if his former Southampton teammate now has the level to play for Real Madrid: “Yes, he’s prepared. Madrid is a bit weak in attack and he’s a type of player who does a lot of damage with space. He could help them reverse their current situation. He can give variants in attack, but he’s not a Cristiano Ronaldo-type finisher.”