Everywhere in Italy, the bottom line is the same: AS Roma are desperate to get the Granit Xhaka deal done.

It all started on Wednesday when Italian journalist Gianluigi Longari explained that Tiago Pinto, their general director, was flying to Milan to try and push through already opened negotiations, including the ones for the Arsenal man.

That is corroborated by the vast majority of newspapers, including Il Tempo.

The local outlet explain the trip was for two things: find those leaving a club and ‘reduce the distances with Arsenal for Xhaka’.

Dragging on for quite some time now, the negotiations between the Gunners and their Italian counterparts have been stalling for a while, as neither side want to budge from their valuation for the midfielder.

His performances for Switzerland, especially that against France, have caught the eye of other clubs, with Paris Saint-Germain reportedly taking some notice. 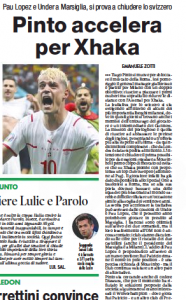 Pinto wants to give José Mourinho his first player, but he also wants to ‘avoid that a top European club goes after Xhaka’.

While the Swiss has ‘given his availability’ to the Romans, they are firmly aware that an offer from one of the biggest clubs in the world could change that, and so a worry is starting to creep in.

That’s why Pinto is doing his best to get the deal over the line sooner rather than later, meaning there’s a good chance someone will budge in the foreseeable future.

Whether it’s Arsenal lowering their demands or Roma upping theirs, however, remains to be seen.