Still looking for a striker to replace Sébastien Haller, West Ham aren’t having much luck so far.

Numerous names have been mentioned, ranging from Boulaye Dia to Gaëtan Laborde, but it appears the Hammers have yet to make an offer for anyone.

There was talk they had €12m ready for the latter and €10m for the former, but both Montpellier and Stade de Reims are still waiting for an official bid.

For Laborde, who has six goals and five assists to his name in 19 league appearances, the preference might be to stay at Montpellier, but he’s also aware of what the money of his sale could do for his club.

Speaking to Midi Libre on Friday, he said: “We know the financial situation of clubs is very complicated. If there’s an interesting offer for me and the club, we won’t be dumb about it. 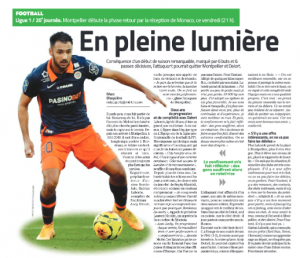 “For now there’s rumours, contacts, interested clubs, but there’s nothing on the president’s desk. I don’t know if there’s a good time to leave, but there needs to be that feeling, to want to go to a club. I want to feel that, like I did with Montpellier, and to be desired. For now, there’s none of that”.

This means that if West Ham are indeed interested in Laborde to bolster their front line, they are going to have to up their game by both making an offer and making the player feel like he’ll be an important part of David Moyes’ project.

If they can’t do that, he isn’t going anywhere.