Now it seems that visit wasn’t enough, because club ‘spies’ have now been in Lisbon, where the Eagles defeated Dinamo 3-0 in the second leg of the round-of-16.

Wolves’ presence at the Estádio da Luz is reported by newspaper Record today, who highlights the club is managed by a Portuguese boss, Nuno Espírito Santo.

Wolverhampton’s targets continue to be unclear, with the Portuguese media not pointing out any possible names. This week, claims from Italy said the Molineux side are interested in João Félix. 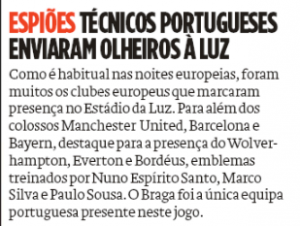 The 19-year-old started on the bench last night, but did a good job when coming in, creating several plays and confusing Dinamo Zagreb’s defence. He did much better than the game in Croatia.

Given the likely transfer fee, Félix is quite possibly out of Wolves’ price range.

The game attracted an impressive number of scouts, as Benfica often do.