The same outlet explained on Friday that the right-back has been pinpointed for a transfer this summer, and that’s been also relayed in today’s edition of the newspaper.

According to Mundo Deportivo, Semedo’s agent Jorge Mendes handles ‘important offers’ from the Premier League and Serie A.

There’s no mention of the details of the clubs who have made offers, but the report adds Nuno Espírito Santo’s side are the latest club to show ‘serious interest’ in the right-back.

Barca were working on renewing the Portugal international’s contract a month ago, and Josep Maria Bartomeu mentioned the defender is one of the players considered ‘non transferable’ this summer.

However, there has been a change in the fullback’s situation after Ronald Koeman’s appointment. The Dutchman prefers to bring in Ajax’s Sergiño Dest, and therefore, he would not see Semedo’s departure badly.

Mendes made a trip to the Spanish club’s offices in recent weeks to analyse his client’s immediate future at Camp Nou.

The super-agent plays a vital role in Wolves transfer business, and with the Catalan club willing to offload Semedo, Mendes can help take his client to Molineux. 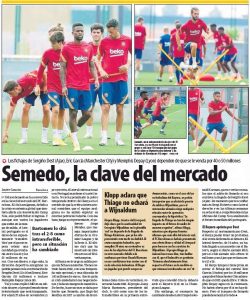 Mundo states Barcelona are looking for a fee of around €40-50m from Semedo’s sale, and then want invest those funds in signing other players.

Should Wolves end up signing Semedo, he will replace Matt Doherty, who left for Tottenham Hotspur, in their squad.