On January 9th, Sport reported Barcelona are ‘working on the incorporation’ of Adama Traoré, if Ousmane Dembélé decides not to renew his contract. The same outlet stated a day later that the Wolverhampton Wanderers’ player ‘would be delighted’ to return to his old club.

Fast forward to this week and Monday’s edition of Sport explains the La Liga side have ‘tried until the end’ to renew Dembélé’s contract. His current deal expires in June 2022 and he’s expected to leave the club in January or on a free transfer next summer.

The Catalan club need a replacement for Dembélé and the Wolves attacker is identified as the ‘main option’.

This option was put on the table last month and the possibility of concluding a deal advanced with the 25-year-old’s visit to Barcelona, where he personally gave his ‘OK’ to join the Blaugrana.

It’s claimed the Spain international ‘wants to return to Barca’ and the latter are already aware of the conditions to carry out the deal, through his representative, Jorge Mendes. The super-agent is already at work, given his close ties with both clubs. 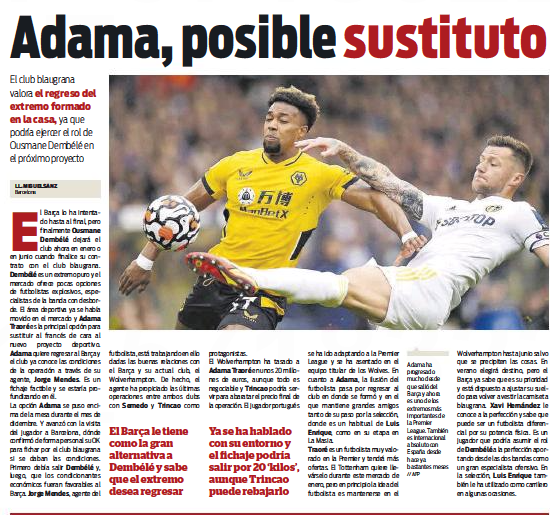 Wolves value Traoré around €20m, but his price tag can be lowered by including Francisco Trincão, who is currently on loan from Barca at Molineux, as part of the deal.

The Spain international is also wanted by Tottenham Hotspur in January, but Sport add that ‘in principle’, the player’s idea is to continue at Wolves until the end of the season.

Traoré will decide next summer and Barca are aware it is his ‘priority’ to return to the club and he’s willing to take a pay cut so that he can rejoin the La Liga giants.