Ruben Vinagre is on the front page of Friday’s edition of Record, with Sporting getting more serious in their attempts to sign the Wolves player.

It had been thought the Lisbon club would be signing Vinagre to cover themselves for a Nuno Mendes exit, with the transfer fee for the latter also helping to find the money to send to Wolves.

That isn’t the case any longer, and Sporting are going full throttle for the signing anyway, having been convinced they need to do the deal quickly. There’s several reasons for that, and perhaps chief among them is a possible swoop from Benfica.

Sporting wouldn’t want to lose the chance of signing Vinagre to their city neighbours, so are hurrying their efforts. 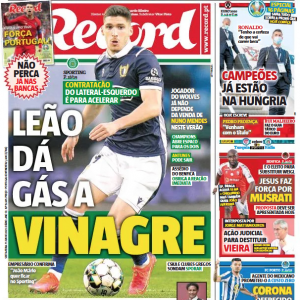 Having spent the past season on loan with Famalicão, the 22-year-old is now on holiday and ‘awaits the green light from Bruno Lage’ to sort his future out.

Sporting’s perfect deal would be a loan with a purchase option, however, they’re also prepared for a full transfer as long as Vinagre costs less than €10m.