There’s various reports in the Portuguese media on Saturday about interest from England in Gonçalo Ramos, with Wolves, inevitably, being the club named.

Ramos is 19-years-of-age and plays for Benfica as a striker. Last season he played 93 minutes in Liga NOS and scored twice.

He was mainly with the second side, and in 12 matches in Liga Portugal 2 he found the back of the net eleven times and added three assists.

O Jogo report the youngster is ‘being attacked by English clubs’, with Wolves the only one getting a mention. The Portuguese newspaper state, according to their own information, that Benfica president Luís Filipe Vieira has already received several proposals from England.

None of the offers have been considered high enough, and the player is protected by a €120m clause. Unlike Joao Felix, it’s near certain he won’t move for anything like the amount of his clause. 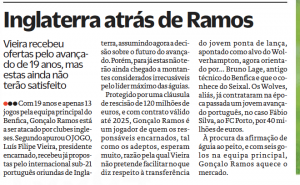 Bruno Lage is said to know the player well from his time at Benfica, and that would encourage the Wolves claims.

For now, this seems to be Benfica making it known they have another gem coming through, and that he’s attracting Premier League interest already.