Following rumours from France of Fosun, the owners of Wolves, potentially making a swoop to buy Bordeaux, denials came from media close to the Premier League club.

However, that doesn’t mean the French media have now dismissed the idea, with L’Equipe touching on Fosun in a Wednesday article about the future of the troubled Ligue 1 side.

Rothschild bank have been tasked with handling the sale of the football club, and are actively in the process of managing that. L’Equipe state Rothschild have received ‘at least five letters of intent’ from people interested in securing a deal for Bordeaux.

The current owners want everything sorted out by the end of June, so things should move relatively quickly.

As for Wolves’ owners, L’Equipe explain that the claims of a potential move from Fosun are ‘considered credible’ by those in-the-know in France. 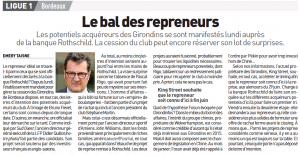 That’s not to say they’ve already made a move or even contact, and one problem could be pressure from the Chinese government, with concerns over Fosun investing too much money outside of the country.