A few weeks ago, Wolves were said to be on the verge of agreeing a deal with Sporting for the transfer of Rui Patricio.

The goalkeeper moved to Nuno Espirito Santo’s side in the summer, but only after rescinding his contract with Sporting for what he cited as ‘just cause’.

Following the attack at the Lisbon club’s training centre, Wolves managed to agree an €18m deal with Sporting, but the club’s then president Bruno de Carvalho changed the terms at the last minute and the deal collapsed.

That’s when Patricio reached the end of his patience and walked out.

Since then, Sporting have taken legal action against Wolves and then shelved those plans when Bruno was finally voted out, and every week since the Portuguese media have claimed the two clubs are close to agreeing an amicable deal. 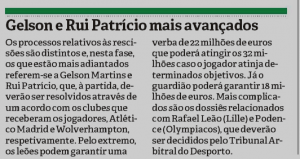 Wednesday’s edition of Record states the Patricio negotiations are ‘more advanced’, along with talks to agree a deal with Atletico for Gelson Martins.