Home Europe Wolves player could be ‘last minute possibility’ for club, ‘valuing him from...
SHARE

Despite a couple of days of strong articles suggesting Roma could make a move for Wolverhampton’s Leander Dendoncker, the story went quiet as quickly as it appeared.

However, Gazzetta dello Sport on Wednesday would like everybody to know the Serie A side have not completely forgotten about the Belgian utility player, who was a part of Wolves’ team that knocked out Liverpool from the FA Cup.

The Italian outlet, as well as relaying quotes from the player’s brother and agent (who revealed he still hadn’t been in touch with Monchi), explain that Roma are ‘valuing him from a distance’, adding that he could be a ‘last-minute possibility’.

Considering the 23-year-old is still technically on loan from Anderlecht, the situation remains a bit tricky, as there isn’t any real clarity when it comes to the player’s future at Molineux. 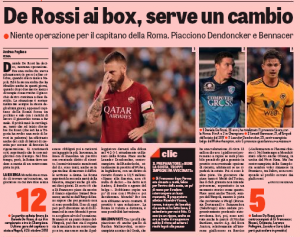 Not the best place to start negotiations.

As things stand, the man at the top of their list appears to be Empoli’s Ismaël Bennacer, formerly of Arsenal, but the Serie A minnows are firm in their stance: they don’t want to see their starlet leave.