Over the past week, Fosun, who own Wolves, made a significant investment in Rio Ave, with both clubs also having strong connections to Jorge Mendes.

Mendes started the week by closing the terms on Ederson’s transfer from Benfica to Manchester City. The 23 year old goalkeeper was sold for €40m, with Rio Ave, his former club, getting a percentage of that. Due a big cut of Rio Ave’s percentage is Gestifute, Mendes’ agency.

After that deal, Mendes took Nuno Espirito Santo, who was his first ever client, to Wolves. Mendes and Nuno had most closely worked together at Valencia, with Mendes first helping Peter Lim buy the Spanish club, and things haven’t been going well at all for Los Che. 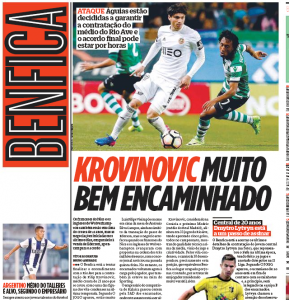 Another link comes with Filip Krovinović. O Jogo report on Saturday that Benfica are keen to do a deal for the Rio Ave player, but face competition from Wolves and Nice.

Wolves are said to have made an offer in the region of €3m for the 21 year old midfielder, but Benfica are confident.