Wolverhampton Wanderers are the ‘main favourite’ to sign Sporting Club de Portugal star Palhinha but could face competition from Tottenham.

That’s according to A Bola, who say the midfielder is looking destined to leave the Portuguese club this summer.

The newspaper reports that Palhinha is likely to have made his last appearance for Sporting and said farewell to the Estádio José Alvaiade.

The 26-year-old is considered a player with a market, and ‘everything indicates’ that this summer is the one in which he will be on the move.

The Premier League is his most likely destination, particularly as the player has made it clear he would love the move to England, and Wolves, led by Bruno Lage and with Jorge Mendes wielding his influence, are the ‘main favourite’ to secure his signature. 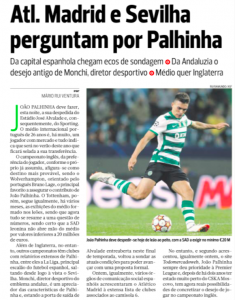 Tottenham, however, have been following the midfielder’s performances for several months and could enter the race. Sevilla and Atlético Madrid are also thought to be keen.

Any transfer will come down to a matter of money, as they always do, and in Palhinha’s case, SAD will not give up the midfielder for less than €20m.

That had previously been put at €30m.

Whether that’s a price Wolves or Tottenham are willing to pay remains to be seen, but both are in the race nonetheless.