Throughout this week we’ve covered various reports that Arsenal and Wolves are keen on Juventus’ Daniele Rugani.

Both clubs have made their interest clear to Juventus, and last night it seemed the Gunners were at the front of the queue. In fact, they had agreed on personal terms with the Italian.

Wolves, though, appear to have thrown a spanner in the works with Corriere Dello Sport reporting they have offered £30m outright for the defender. That is close to the £35-40m valuation Juventus have put on him and may tempt them into a sale. 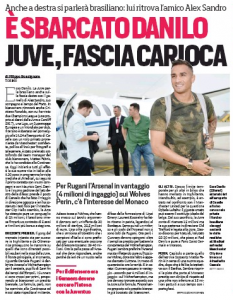 It also scuppers Arsenal’s bid as they were hoping to secure a loan deal and had already seen a two-year proposal turned down by Juventus.

Rugani is said to prefer Arsenal but is reflecting on Wolves offer, mainly because Patrick Cutrone moved there earlier this summer.

Juventus will now likely force Arsenal to match the bid from Wolves, particularly given they don’t seem keen on letting Rugani leave on loan. Whether the Gunners can do that, given their apparent lack of funds this summer, is up for debate.

They could raise funds with a sale, perhaps Alex Iwobi to Everton, which would give them the money to match Wolves current €30m bid.