Wolverhampton Wanderers are leading the race to sign Sporting midfielder João Palhinha, according to reports from Portugal today.

Newspaper Record features a story saying the 26-year-old is a ‘preferential target’ for the Molineux side, who may have to replace Ruben Neves this summer.

Palhinha is said to be seen as a player who’d adapt well to the Premier League. Partly because his way of playing has been a problem in Portugal, where referees are being accused of being too harsh on him.

It’s claimed that Wolves have an offer to present to Sporting, even though it’s still not clear how much they’ll put on the table for the midfielder.

The Lions, who know this will be one of the last chances the midfielder will have of moving to the Premier League, are entering the summer window looking to make €30m with his sale. 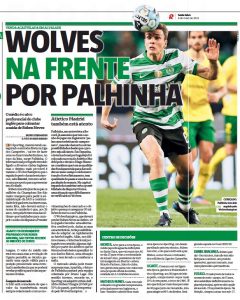 At the end of the story, Record sounds very optimistic about the move, as they bring a paragraph which says: ‘The market can still bring surprises but, from the outset, Palhinha’s future will depend on the team led by Bruno Lage. On the other hand, Sporting will definitely acquire Rúben Vinagre (€10m for 50% of the pass), who was loaned by Wolverhampton.’

Still, the newspaper highlights that Wolves aren’t the only club willing to sign Palhinha this summer, as Atletico Madrid are interested in the player as well. Then they point out that the La Liga side would give him the chance of fighting for titles, something he’d be unlikely to do at Molineux.