We at Sport Witness are absolutely devastated for not seeing it coming. It was right in front of our faces and we missed it.

A young Jorge Mendes client, with a lot of potential, who now struggles to find good form and isn’t wanted at a top club anymore? Of course he would be linked to Wolverhampton Wanderers.

It’s Renato Sanches we’re talking about, whose possibilities for the future are reported by Portuguese newspaper Diário de Notícias today.

Following yesterday’s news launching the idea of a return to Portugal, the outlet claims Sanches has asked to return to Benfica, with the Eagles having already started conversations with Bayern Munich to bring him back. 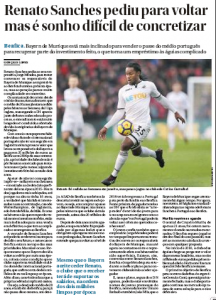 But things don’t look very good for them.

Because in case Bayern Munich loan Sanches out again, his new club will have to pay his full salary of €2m per season after tax, besides a transfer fee. There’s also the possibility of a permanent move, which the Germans prefer, and are demanding at least €20m.

Benfica don’t want to spend that much for any of these two possibilities, and that’s why things haven’t advanced for now. Meanwhile, Wolves and Inter Milan are named as the clubs who are interested.

There’s no details on the chase from the English and the Italian sides. As Jorge Mendes works to facilitate the deal with Benfica, it seems the other sides are still to get a chance to start the talks.

Jokes aside, Renato Sanches to Wolverhampton is indeed a move that makes some sense, at least for the Portuguese side of the club. But how would fans take this after the midfielder’s failure at Swansea City?

Sanches is still only 20 years of age and at Sport Witness we remember well when he was arguably the most wanted young footballer in Europe. Manchester United were thought to be leading the way, and then Bayern came from nowhere and got a deal done.

And it wasn’t just hype. A revelation at Euro 2016, Sanches was named the best youngster at the tournament.