Wolverhampton Wanderers have been making some noise in the Mexican media for a while now, with things getting a lot bigger lately, since they’ve launched their commemorative new kit and been pushing the links.

The local press normally reports these marketing actions with great joy, and we admit we had been expecting a more analytic story about what has been happening.

And it turns out we get a great story from Mexican newspaper El Economista today. The front page of their sports section brings a headline saying: ‘Wolverhampton monetises the success of Raúl Jiménez’

El Economista recalls all of Wolves’ actions towards Mexico, showing how big the club’s focus is. They point out that the Molineux side are one of the few Premier League clubs who have a Spanish-language account on Twitter. And from the last 50 tweets from that profile, 31 had images or information about Raul Jimenez.

The newspaper interviewed Angel Palma, director of Total Match agency, who said: “Obviously it’s a nod to the Mexican fans. They are turning to see our market, no European club had exploited so well having a Mexican in their ranks; It’s an issue that clubs have to attend to, making a player profitable not only in football. In England it’s a team with local identity, and Mexican football implies an impact in Mexico and the United States.” 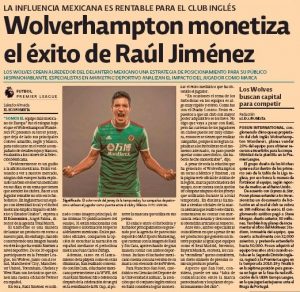 One of the biggest media impacts Wolves had in Mexico was when Raul Jimenez celebrated by paying tribute to Sin Cara. Another marketing action, because as revealed by El Economista, the player and the WWE star both have the same sponsorship agency, MAS Sports Marketing.

And from all the information brought by this story, the most interesting one is about shirts. El Economista points out that Adidas’ Mexican website doesn’t sell any Wolves jerseys, and by calling some stores, employees say they don’t know if they will even stock the club’s products.

Francisco San José, a Sports Sciences professor at the Universidad Anáhuac, considers it to be a “lack of communication between the sponsoring brand and the club’s positioning plans”.