Even though the exit had been confirmed by the club earlier in the week, there was an outpouring of emotion towards the Portuguese coach, and the strength of feeling between the manager and the club’s support was clear.

Wolves have already been linked with several managers, most of whom are Portuguese, with Bruno Lage looking likeliest right now.

Earlier today, we brought a claim from Portuguese TV that Sérgio Conceição is considered too expensive for Wolves. It wasn’t made clear why the Porto boss was considered out of reach, or what the financial aspect was specifically related to. 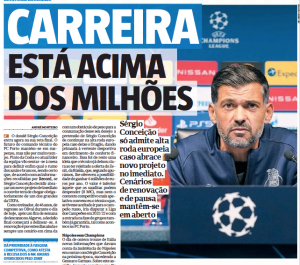 Record now add some weight to the idea that Sérgio Conceição won’t be taking over at Wolves this summer. They state the manager is only interested in leaving Porto for a ‘great’ European club, with it being stated he’s already turned down a Saudi offer, as well as an approach from Zenit.

Without something hugely tempting, it’s felt he may as well stay where he is.