That’s the headline used by Portuguese newspaper Correio da Manhã to describe the race for the Benfica striker.

Following a loan spell at Tottenham Hotspur, the 26-year-old is now back at the Lisbon side, where he shouldn’t stay for much longer.

Correio da Manhã report Roma and Wolverhampton Wanderers are the ‘most likely destinations’ for the striker, for whom Benfica are set to demand €45m.

Roma are said to be in the lead, as manager José Mourinho has just worked with the striker at Spurs. However, just like Wolves, the Italian side are having trouble to pay the amount asked by the Eagles. 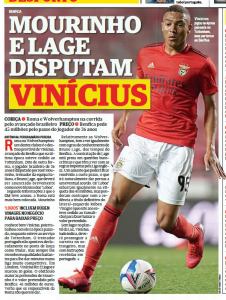 We all know Wolves are still to announce the manager who’s replacing Nuno Espírito Santo, but Correio da Manhã are not afraid of saying it will be Bruno Lage.

They claim the former Benfica boss has his issue stuck by ‘bureaucratic issues’ and it should be sorted pretty soon. The coach knows Carlos Vinícius pretty well from their time at Estádio da Luz.

A good thing for Wolves is that Benfica are currently interested in Ruben Vinagre, who’s currently loaned by the Molineux side to Famalicão. Correio da Manhã says this is a factor which could make Vinícius’ arrival a little cheaper for the Premier League club.