Wolverhampton Wanderers youngster Hugo Bueno has revealed the club had ‘a lot of doubts’ before signing him for their youth team.

The 17-year-old left-back moved to Molineux last year, arriving from obscurity in Spain after observers recommended him to Wolves scouts.

They were subsequently impressed by the young player they saw playing in Arcosa and within a week had proposed he come and train with the club’s youngsters.

He’s since establishing himself in the youth ranks this year, making 11 appearances in all competitions, scoring one goal and registering two assists.

Getting to that point was no easy task, though, as Bueno explained in a recent interview with Marca.

“It was in January 2019. They liked me a lot in the match they saw me, and they offered me to go there for a week to play with the under-18s,” he told the newspaper.

“I accepted, of course. I played with the two friends. They told me that I was a perfect fit, but that they wanted me to come back, to be seen by more coaches.

“In March I went back, and before that, they travelled again to Spain to see me.

“I think they had a lot of doubts because I came from a team that was not professional and they wanted to be very safe.”

The move to Wolves has proven to be a complete cultural upheaval for Bueno, who as well as leaving his home at 16 has had to contend with a different way of life entirely.

This has involved living with a family in England, a rule the Premier League implemented to ensure the best possible environment for youngsters arriving from abroad.

That experience, as well as the rigours of life as a professional footballer, are something the youngster admits hasn’t been easy.

“Everything is very different.  In football, it’s much more intense, more physical. We have four times a week a gymnasium and more in preseason. I’ve gained muscle!” he added. 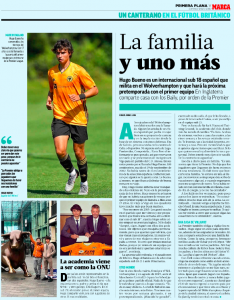 “It’s hard. You’ve just trained, you go home at four, at five dinners and at six it’s all closed.

“You get up. You go to the sports city. You train and go home.

“But my mentality is that if you want something, you have to sacrifice.

“The club has to find you a family. I was in one to arrive, I moved to another because they were going on vacation or something, and when they returned, I was welcomed again.

“We didn’t see much of each other beyond dinner. It’s a good experience. And for English, it’s good, because you get loose.”