When Ruben Neves joined the Portuguese national team squad for the current international break, one of the first questions journalists asked was about his frustration at missing the 2018 World Cup.

The Wolves player said it’s all fine, claiming that Portugal have plenty of good midfielders after all.

However, he’s now proving to be among the best of them.

Local newspaper Record today has a story titled ‘A full response in the League of Occasions’, showing the players who are now having a chance after missing the World Cup.

The outlet says ‘no one discusses their starting spot’, which includes Neves. The midfielder has three starts in the League of Nations, including the game against Italy last Saturday. 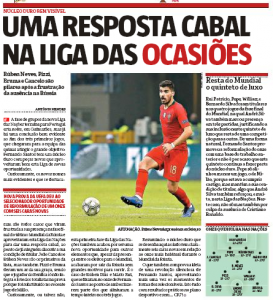 Neves is said to be one of the pieces of Fernando Santos’ ‘silent revolution’ in the Portuguese national team, as he’s become one of the ‘pillars’ of the starting XI.

The midfielder now has such an important role in the team that he hasn’t been replaced in any of the three games he’s started for them.

Due to a yellow card picked up last weekend, Ruben Neves is missing today’s game against Poland. Although he should be pretty certain he’ll be named in the next call-up.