Ahead of the current summer window, Everton’s Moise Kean was repeatedly linked with moves to PSG and Juventus.

The striker spent last season on loan with the French club, and impressed enough for them to want to keep him longer term. There were even claims of a potential permanent move, yet things have calmed somewhat in recent weeks.

Similar can be said for Juventus. Not so long ago, their local sport newspaper, Tuttosport, would have a daily article on Kean potentially returning to the club, and other stories would be carried by the likes of Gazzetta dello Sport.

Saturday’s edition of L’Equipe reports PSG have been trying to take Kean back on loan, working hard to agree a deal with Everton. However, that’s been ‘without success so far’, and L’Equipe suggest there’s a chance the whole thing will slip away. 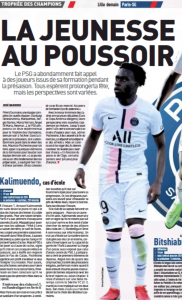 They look at this with regards to Arnaud Kalimuendo’s future with PSG.

Should Kean arrive again on loan, then the 19-year-old PSG player will be aware his club aren’t relying on him in the short term, and could therefore go out on loan himself.