Even though the Portuguese media wrote on Monday that Sporting winger Jovane Cabral was about to move to Burnley, the updates today claim this transfer is actually not happening.

A couple of outlets now say that despite the Clarets’ interest in taking the 24-year-old to the Championship, he actually chose to turn down the opportunity.

Newspaper A Bola, who had first reported the move, is one of those dismissing it today. They insist there was an agreement worth €4m between Sporting and Burnley for the transfer, with another potential €1m in performance bonuses.

Jovane, however, declined the Clarets’ offer, reportedly because of the ‘conditions’ put on the table by the English side. Now he ‘continues to study the many possibilities’ that could show up in this window. 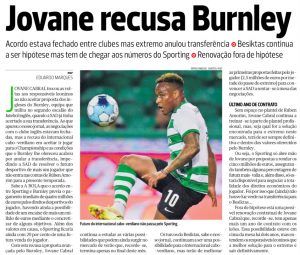 Newspaper Record is another one saying that the move collapsed. They say Burnley wanted the player to replace Dwight McNeill, but he ‘did not get seduced by the project’, as he’d rather join top competitions, such as the Premier League.

So after rejecting Turkish side Besiktas, he now turned down the Clarets, while Sporting continue trying to find a new destination for him.