Home Premier League Chelsea ‘Will have to deal with it’ – Club suffering after losing player...
SHARE

We knew it would come at some point, but Inter missing Romelu Lukaku has become apparent far sooner than expected.

The new Chelsea star, who already has four goals in four games for the Blues since his £100m+ transfer to Stamford Bridge in the summer, was key to the Serie A side’s success last year, and the sale, which came against the wishes of the fans and staff members, is already costing them on the pitch.

Facing Real Madrid in their Champions League opener, Simone Inzaghi’s men suffered a 1-0 defeat at the San Siro, conceding in final minutes of the second half despite having a number of good opportunities to score themselves.

Gazzetta dello Sport look at the current situation following the game, and ask what was missing for Inter to walk away with the three points.

Their answer is a ‘greater weight in the attacking phase’, and while the club are currently having to change the way their play with Edin Dzeko and Lautaro Martinez leading the line, with their feeling growing by the day, it’s made clear that ‘in certain moments, the absence of the muscles and power of a giant like Lukaku appears evident’.

They state this was always going to be obvious, and Inter ‘will have to deal with it all year round’. 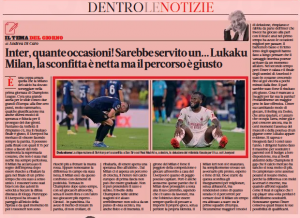 While those in charge did ‘their utmost to replace the starters with the budget at their disposal’, playing a club like Real Madrid ‘at the very high levels of the Champions League’ has made it clear that ‘the gap the transfer market has established is much more noticeable’ than in other competitions.

As for Chelsea in all of this, they are already reaping the benefits of their important expenditure, as the Belgian striker earned them all three points in a 1-0 win over Zenit in their own Champions League opener, ensuring the Stamford Bridge side started their European campaign on the strongest possible foot.