Home Europe “He will become one of the best players of the next decade”...
SHARE

Apart from the public criticisms for when players don’t reach his standards, like Georges-Kevin N’Koudou and Moussa Sissoko, Mauricio Pochettino seems to get on fairly well with most of his team.

Being a young manager certainly helps, allowing him to relate a bit more than other older coaches, and the Argentinean is often seen hugging players and smiling during training.

However, there is one thing the Spurs manager would never be able to do, and that’s becoming friends with one of his players.

Speaking to Sport/Foot in Belgium, he said: “Friend is a big word. What’s more important is getting on well and for there to be trust, but that isn’t enough to be a friendship. I wouldn’t be able to do that.”

What he does want from his players, however, is them to have fun, to be sad when training is over, ‘like Adam Lallana at Southampton. He was like that. Happy with the ball in his feet’. 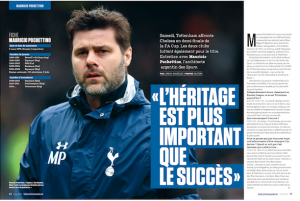 The same applies for a certain Dele Alli, whom Mauricio Pochettino clearly thinks the world of.

He said: “He has energy, charisma, a certain aura about him… We don’t know his limits yet, but he has great potential. If he continues to develop in the best conditions, he will become one of the best players of the next decade.”

At the age of 21, the midfielder has already scored 29 goals and picked up 22 assists in 89 appearances for Tottenham, similar numbers to the 24 goals and 15 assists he had in 88 games for MK Dons.

He’s anything but inconsistent, and he still has 10 or more years ahead of him.

You can see why Pochettino is excited.