Not a day has gone by this week without an update from somewhere in Italy regarding the potential transfer taking Arthur from Juventus to Arsenal.

The latest was that, following a meeting with Federico Pastorello, the Gunners were more open to the idea of making their offer a longer one, going from six months to potentially 18, thus allowing the Brazilian time to settle in the team and in England.

There was no firm answer, however, but Tuttosport seem to believe that could right around the corner, explaining that ‘perhaps today, the English club should give a definitive answer’ regarding the former Barcelona midfielder.

Furthermore, the fact Pastorello ‘is still in the City is not accidental’, and if Arsenal do, ‘thought creative formulas’, give Juventus what they are looking for (an 18 month loan with a right of redemption is mentioned as an example), then ‘the white smoke could be imminent’. 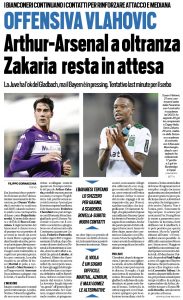 This certainly is promising, but it all depends on what Mikel Arteta’s next move is, as it seems this chase for Arthur comes from the Spaniard himself, with the player described by Tuttosport as ‘a reinforcement strongly desired’ by the manager.