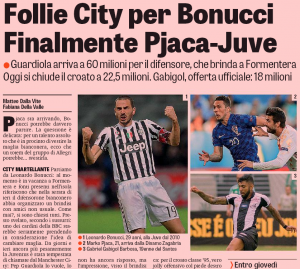 All summer (and it seems to have really arrived in Manchester on Tuesday), Leonardo Bonucci leaving Juventus seemed something of a pipe-dream for Pep Gaurdiola. A completely understandable transfer target, but one which was surely unattainable.

Not only would Juventus not want to sell Bonucci, but surely he wouldn’t want to leave the club either.

Well, Italian newspaper Gazzetta dello Sport have a ray of light in their Tuesday edition, explaining a couple of developments have made them think.

Bonucci is currently on holiday in For­men­te­ra, and last night he apparently organised a toast with friends, something which Gazzetta say was unusual.

Maybe he was simply toasting everyone’s good health, another successful season, the wonder of For­men­te­ra… but Gazzetta think it may mean something.

Not only that, they say that there’s ‘whispers’ Bonucci is actually considering leaving Juventus for Manchester City.

The English club are said to be pressing strongly for the signing, and there’s now a little hope. Juventus would find it hard to say no to Manchester City’s €60m, if the player wants the move.