We should have seen it coming, and we’re kind of kicking ourselves that we didn’t, but Paul Aldridge’s appointment at Marseille was bound to create a story about Dimitri Payet returning to West Ham.

After all, Jacques-Henri Eyraud’s new ‘special advisor’ is there to help with selling players to England, but while many expected Morgan Sanson to be the centre of attention, L’Equipe on Thursday dedicate a whole page to the idea of the former Hammer returning to London Stadium.

This idea, however, started in La Provence a couple of days ago in a profile about Paul Aldridge.

Explaining to their readers who this new figure was, the local newspaper wrote: “He collaborated with Milan Mandaric and keeps tight links with West Ham where the fans are already awaiting many rumours around the French club, with some even fantasising about an improbably come-back of Dimitri Payet”.

This then spread a bit, with a number of websites picking up the line, which leads us to Thursday morning and this big article in L’Equipe.

They state West Ham, who are currently 17th in the Premier League, are ‘studying avenues to urgently strengthen themselves’, and one of them leads to ‘an old acquaintance’ i.e. Payet.

The 32-year-old is currently enjoying a very good season at Marseille, and is one of the main reasons why André Villas-Boas’ side are sitting second in the table behind Paris Saint-Germain. 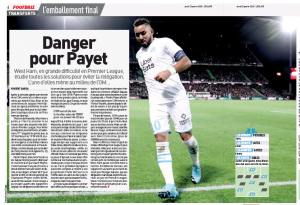 L’Equipe explain the forward is ‘one of the players targeted’ by West Ham, and while there is no indication the Ligue 1 side want to sell, a great offer for the veteran could cause problems for Eyraud, who knows there is FFP to deal with in the near future.

Said offer hasn’t arrived yet, but the French newspaper state Marseille would struggle to get more than €15m for Payet, who still has two and a half years on his contract in the south of France.

As well as helping with FFP, his exit would also ‘alleviate the wage bill’, seeing as he has one of the biggest wages at the club (around €500k/month, on par with Kevin Strootman).

The outlet explain they have no idea how Payet would react to an approach from West Ham, but ‘the prospect of one last big contract’ could ‘make him wobble’ if his former club make concrete moves to sign him.

If you ask us, this all seems very unlikely, but nostalgia is a powerful thing, and with the Frenchman in the form of his life, there might be a temptation to go searching down memory lane in order to avoid relegation.

We doubt it, though. 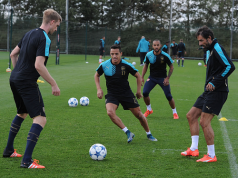