Since Carlos Tévez is becoming a free agent tomorrow, we couldn’t expect anyone else to be on Olé’s front page today.

Boca Juniors are having a hard time renewing with the club legend. While they offer him a one-year contract, the striker only wants to commit himself for six more months.

At the weekend, Tévez said he could return to playing for one of his former clubs, Corinthians or West Ham United before he retires, and now this possibility is being considered by the Argentine media.

Olé brings an extensive story on the situation today, claiming that when he leaves Boca, regardless of it happening now or in January, he should retire or go abroad. That’s when they name the Brazilian and the English sides as possibilities. 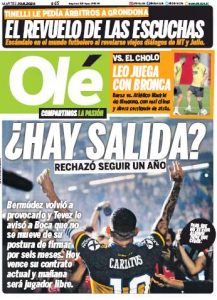 Carlos Tévez is 36 years of age, and even though he’s wanted by many Corinthians fans, we doubt he’d have the same reception at West Ham.

His physical condition hasn’t been great for South American football, so we wouldn’t expect a lot from him in the Premier League.

He had seven goals and five assists in his only season for the Hammers, and ended up moving to Manchester United the following summer.