Over the past couple of weeks, the situation around Gabriel Barbosa had calmed down a bit, but Gazzetta dello Sport have brought an update on the Brazilian’s situation, and it works in West Ham’s favour.

The Hammers are, in this report, the only European destination named for the Inter forward, but only should he go out on loan.

Flamengo in Brazil are reportedly trying to get a deal sorted with the Serie A side for the 22-year-old, but the Italians will only let him return to his home country if the deal is permanent.

If he is to go out on loan, they would much rather he stayed in Europe, where we guess the football calendar is a better fit for their financial schedule, meaning they wouldn’t have to deal with him returning in January like he is now. 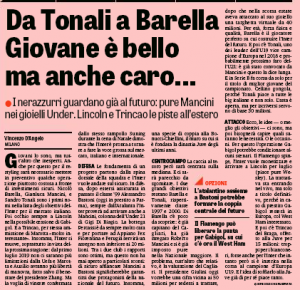 West Ham are the only club mentioned as a loan route for the time being, but that doesn’t mean previously linked clubs like Everton have dropped out completely.

The mention was at the bottom of a lengthy article on Beppe Marotta’s role at his new club and Inter’s transfer ideas under him, and there’s every chance Gazzetta felt the need to throw in at least one Premier League club in there, just for good measure.

Hopefully there will be a bit more detail in the coming days, and then we’ll see what could happen next month.