If you’re a West Ham United fan reading this article, you’ll be sorely aware that David Moyes needs a new centre-back in January.

With Angelo Ogbonna out until the end of the season and Kurt Zouma’s out for around another week or so, the Hammers are a bit thin in the heart of their defence, which is why they are looking to recruit someone in the role before the end of the month.

A few names have been touted here and there, and yet one who was clearly a target for Moyes in the summer hasn’t resurfaced: Duje Ćaleta-Car.

Pushed to one side at Marseille after the summer transfer window, the Croatian has since reintegrated Jorge Sampaoli’s group in the south of France, and there are now doubts as to whether he will be sold, according to La Provence.

As things stand, the centre-back is currently ‘in the dark’ about the whole situation. 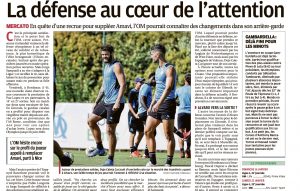 They state the player, who was ‘placed on the transfer list in the summer’ and was ‘requested in particular by Wolverhampton Wanderers and West Ham’, ‘doesn’t know anything about his future’.

In fact, ‘all options are open’ for the Croatia international, but there is now a doubt over whether the 25-year-old would still be sold, because he has performed well since returning to the first-team, which was exemplified in his ‘convincing’ display against Bordeaux on Friday.

Therefore, West Ham would have to test the waters somewhat, as a deal for Ćaleta-Car isn’t as easy as it once was.