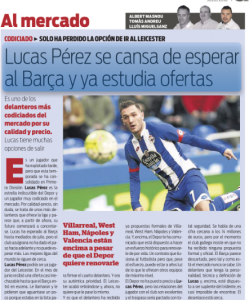 Catalan newspaper Sport have a piece in their Tuesday edition, which explains Lucas Perez is moving further away from a transfer to their local club Barcelona.

The Deportivo La Coruna striker has been loosely linked with Barcelona for a while, but Sport say he’s sick of waiting.

After expecting a Barcelona approach around mid July, Perez is now getting tired of waiting, and starting to believe that other options may well be better.

Barcelona are looking for a back-up to Neymar, Lionel Messi and Luis Suarez. They don’t want to spend much money, on either wages or fee, and whoever they get must be prepared to be a support act.

Villarreal, West Ham, Napoli and Valencia are all said to have made formal proposals to the player, and his club want a fee around €14m.

Deportivo would prefer they didn’t get the €14m and he stayed, and are ready to offer the 27 a ‘contract for life’.