Home Europe West Ham ‘see something’ in player, and England his ‘dream destination’ this...
SHARE

In January, we relayed news from Belgium that Newcastle United and West Ham United were waiting in the wings for Wesley Moares, but their interest wasn’t concrete.

The Hammers get a mention in today’s edition of Het Laatste Nieuws.

While discussing the Magpies following the 22-year-old, the Belgian newspaper states they’re not the only club charmed by the Club Brugge star.

It’s claimed Manuel Pellegrini’s side ‘see something’ in the Brazilian, who has been in fine form during the 2018/19 season, scoring 17 goals and registering 10 assists in 48 appearances across all competitions.

Amid interest from clubs outside England, the South American’s desire is to play in the Premier League as that remains his ‘dream destination’.

Last month, the striker publicly expressed his desire to make a switch to England and explained he has “closely followed the Premier League.” 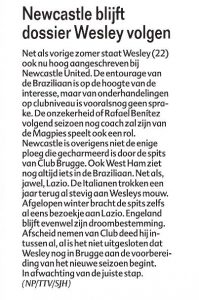 Wesley still has four years left on his contract with the Jupiler Pro League side, but, HLN explains the player has already said goodbye to his current employer.

Whether or not West Ham can land Wesley is to be seen, and they need to be make a concrete move first.