With reports from Argentina saying Jorge Sampaoli is keen on taking Rodrigo Battaglia to the World Cup this year, the Portuguese press made a big deal of it, as it could mean a big deal for Sporting.

The player’s presence in the tournament could increase his price,, and that’s why it would be quite interesting for the Lions.

Today, all the Portuguese sports newspapers are covering this story, but only one of them pushes it into a transfer article, which is A Bola.

They say that West Ham United are preparing a €30m offer for Battaglia, to be presented in the summer transfer window. 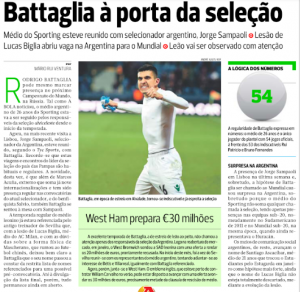 After getting close to signing William Carvalho last year, West Ham would have changed their target, and are willing to bid with half of the Argentine’s release clause.

This isn’t the first time similar has been claimed in Portugal about the Hammers and Battaglia.

West Bromwich Albion also get a mention for having their €20m bid rejected in the January window. But with no updates since then, it seems the Baggies’ interest in the player has gone cold.

Maybe that puts West Ham in the lead.